Choosing a VBAC, by Aimee Karr 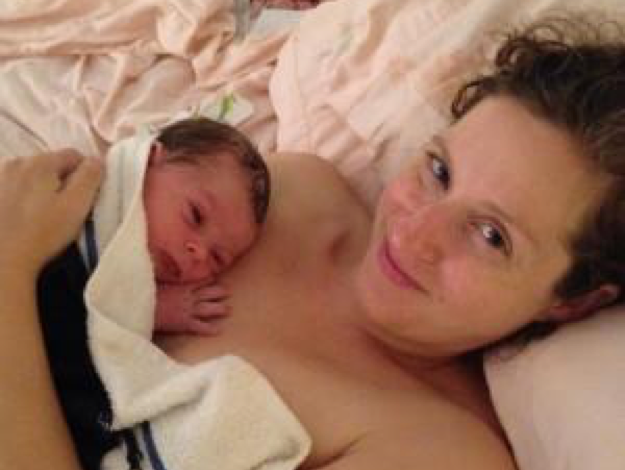 On September 20th, 40 weeks and 3 days pregnant, after over 3 weeks of contractions coming and going, I woke up and started to cry. I said to my husband, “It’s so hard not to be frustrated about this. I just want to meet our baby.” He reminded me of my friend Maja who told me that her ideal labor would start in the morning  and the she would have the baby by dinner time, which is exactly what she did. He encouraged me to “make this the day.” The day before, my acupuncturist told me that I needed to walk a lot and, according to Chinese medicine, “avoid annoying people.” As much as I adore him, that morning my 3 year old son very much fit in that category, so the first step was sending him to my parents who had been staying in our building for the last week to help out.

Then we set out walking. I had on my sunglasses and headphones playing tribal drums so I could reduce distractions and stay in my birthing zone. We walked between contractions and I would come down into a big deep squat during. By 11 am, they had intensified and around 3pm we let my midwife know that it seemed like things may be happening, as my contractions were 4 minutes apart and a minute long. We were planning a HBAC (Home Birth After Cesarean)  and my midwife, Valeriana, who lives north of the city—knowing that the next day was the 1st day of the UN General Assembly and traffic and street closures would be killer—asked if there was a place she could sleep if she were to come that night. Our son was still with grandma and grandpa, so we made up the couch in his room for Valeriana. My husband and I spent the next several hours dancing to Frank Sinatra, eating, and just enjoying being with one another.

When my midwife arrived, my contractions spaced out a bit, Valeriana said that was totally normal and gave us her labor philosophy: “sleep at night and labor during the day.” At a certain point labor is unstoppable, and then you just have to power through, but if it’s possible to slow contractions so you can rest for a while, it can be hugely beneficial. She recommended a bath, (which did space my contractions out) and trying to sleep. I woke up maybe 15 times in the night, but mostly slept through the contractions. In the morning, things got going again, a bit stronger than the night before, and I, thankfully, felt quite well rested.

My husband and I walked to acupuncture Monday morning (after a lovely roll in the hay to try to get things going). My contractions definitely got more intense as I was on the acupuncturist’s table and by the time I left, I was struggling significantly more on our 25 minute walk home. Our doula Rebecca met us at home just to check in and we all had some lunch together before I became really tired. My midwife had given me some homeopathic remedies that morning to try to get things moving. Contractions spaced out again, which made me a bit nervous, as I really wanted this to be “it”, but I knew I need rest for the the journey ahead.

When I got up from bed around 5pm, the contractions were more intense. I had some soup and we called our doula to come around 7pm and our midwife, who had spent the day with her family in our neighborhood, came back around 8:30pm. The space between contractions was a blissful vacation. I had no pain and was able to enjoy the moments in between with my birth team. We all talked and laughed in the kitchen and had a lovely evening together, stopping every few minutes to breathe and moan and massage. My midwife did not do any internal exams, but she felt like I was making progress and was happy with what she was seeing and hearing. She went to bed around 10pm and got up to check on us every so often.

At around 3am the dial turned up to 11. When I would move away from moaning and into screaming, my husband would start OMing, to help me get back to center, which was a great comfort. Our doula joined in too, and I was surrounded with OMs. I started having excruciating hip pain with every contraction. It felt like my body was literally being torn apart.  Throughout my labor I was working to stay in my body and out of my head, which, as a doula and childbirth educator, was a challenge. When I was throwing up and shaking and having unbelievably insane hip pain, there was one moment where I moved out of my body and into my brain and said to myself, “I must be in transition. There is no way I am not at least 8cm. I am almost there. I can totally do this. It won’t last forever. This is happening. I will meet my baby soon. I just have to breathe.”

My midwife was sleeping with earplugs and told us that she wouldn’t hear if things got intense, so we’d need to let her know if anything changed. Well…I was in the shower, moaning/OMing like crazy and I woke her up, which she very sweetly said she loved hearing, and she knew it was time to get set up for the birth. She called her assistant, who arrived soon after. The sensation in my hips was unlike anything I’d ever had my clients describe, and during one of my contractions I screamed, “What is this? Why is this all in my hips?” My midwife came in and talked to me in between contractions, asked me what I was feeling and assured me that everything was normal and that some women feel labor in their backs, some in their hips, some in their belly, and that it was all fine. She told me to take all of that pain and imagine bringing it right to the center of my body. I feel like that really helped me to let go. I started chanting “Oooooooooooo-PEN!” with each contraction and soon my husband was joining in, too. I would rest on all 4s between and then rise up to kneeling during the contractions, squeezing my own hips, because I didn’t want anyone else to touch me at that point. I felt really hot, and my doula began freezing wash cloths and placing them on my back and neck, which felt great.

At around 5am I had a contraction that felt somewhat different and in the middle of it I yelled “pressure, pressure!” My midwife asked if I felt like I wanted to push and suggested I try with the next contraction to see how it felt. I tried and said “OH NO! I don’t like that!” She suggested I sit on the toilet for the next one and see how it felt. Pushing felt MUCH better. At that point, she examined me for the first time to make sure I was fully dilated before I started really pushing. I was, and the membranes were still intact. She suggested I get back in the shower and kneel down with the water on my back behind me and the ball in front of me, so I could lean forward and rest in between, and explore pushing while they prepared the room for the birth. The sensation of pushing was absolutely incredible. I felt the bag of waters move from the top to the bottom of the birth canal in the 15 or so minutes I pushed in the shower. I put my hand down and felt the bag of waters bulging and called to my midwife to tell her. We moved out of the shower and onto the bed. I was on all 4s, my husband sat at the top of the bed, so I could have my arms around him and rest on him, in between. I didn’t realize I was doing it, but he told me after that during the contractions I had my hands on his thighs and was pushing and squeezing with all my might, which was apparently more than a bit uncomfortable for him, but he was so supportive and didn’t say a thing at the time. Later he said that he was happy to be feeling only a fraction of what I was feeling. I pushed for just about an hour before our Wesley was born. My midwife suggested I feel his head as he was crowning which I think really helped me to give it my all for the last few pushes.

After Wesley emerged, he was placed on the bed, between my legs for me and my husband to take a pause and just look at him–to really soak him in as this unique being that we had created–to take a few breaths to honor the work that I had done–and then, when I was ready, I welcomed him into my arms and rolled onto my back with him. He rested on my abdomen and began to do the “breast crawl” and the placenta birthed easily. Wesley emerged with his hand next to his face, which caused a small amount of tearing. My midwife repaired the tear while Wesley rested on my chest and my husband snoozed next to us on the bed.

My first baby was born via cesarean due to breech presentation, which was undiscovered until I was in labor. This was also an amazing birth, and a joyous event, although not my plan. I believe that we all know how to give birth to our babies and our babies know how to be born, and thus there are no 2nd class births, even when things do not go according to plan.  I am grateful for both experiences. That said, Wesley’s birth, all 43 hours of it, was exactly the birth I wanted–which brought much healing. I am beyond grateful to my dear husband and wonderful birth team for helping me feel like a superhero.