You are looking for information just in case

“I’m anticipating a vaginal birth but want information on a cesarean, just in case. Is The Mindful Cesarean for me?”

The Mindful Cesarean is for anyone who expects to give birth vaginally but who wants to prepare for a positive cesarean just in case.

Experts debate the number, but in human birth there seems to be an irreducible percentage for whom cesarean is the safest way to birth. The World Health Organization has long put this number between 10 and 15 percent.  A recent review of the medical literature argues that a reasonable cesarean rate might be closer to 20 percent (See Goer, 2015 for a critique of this review).(i)

Can we take this number down to zero? Probably not. Even the U.S.’s best-known midwife, Ina May Gaskin, had a two to three percent cesarean rate among the women she supported.  The famed Drs. Robert Bradley and Michel Odent, both ardent supporters of natural birth, had similar rates, as do some of the most skilled home birth midwives I know. Like it or not, the possibility of a cesarean is a reality. And when it is truly needed, we can be grateful it is as well-practiced and widely available as it is.

If your baby were to fall into the group of babies for whom cesarean is the safest way to be born, you would want to be well-prepared. You would want to appreciate the range of options available. And, your baby would of course deserve to be as fully welcomed as any baby. If you are looking to prepare for a cesarean as a just-in-case scenario, the approach offered here can lessen the fear of the unknown and, if a surgical birth is needed, help you get your bearings at a time when everything can feel disorienting.

Because the U.S. cesarean rate of 32.7 percent far surpasses the World Health Organization’s recommendations, and data suggest that exceeding these recommendations may do more harm than good, you will want to take a look at new guidelines developed to reduce the number of primary cesareans.(ii) These guidelines put out by the American College of Obstetricians and Gynecologists and the Society for Maternal Fetal Medicine reflect a long-overdue push to lower the number of unnecessary cesarean.  To lessen your own likelihood of an unnecessary cesarean, make sure your doctor or midwife is practicing according to these guidelines. I discuss these guidelines in “How to Avoid an Unnecessary Cesarean,” under “More Good Stuff to Read…”. 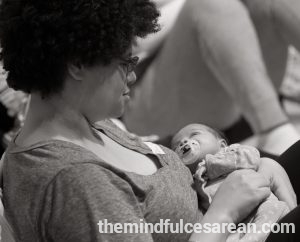 (i) Goer, H.,  “Dueling statistics: what should the cesarean rate be?” Science and Sensibility (2015). Retrieved from