Being Together, by Rasheed Hislop 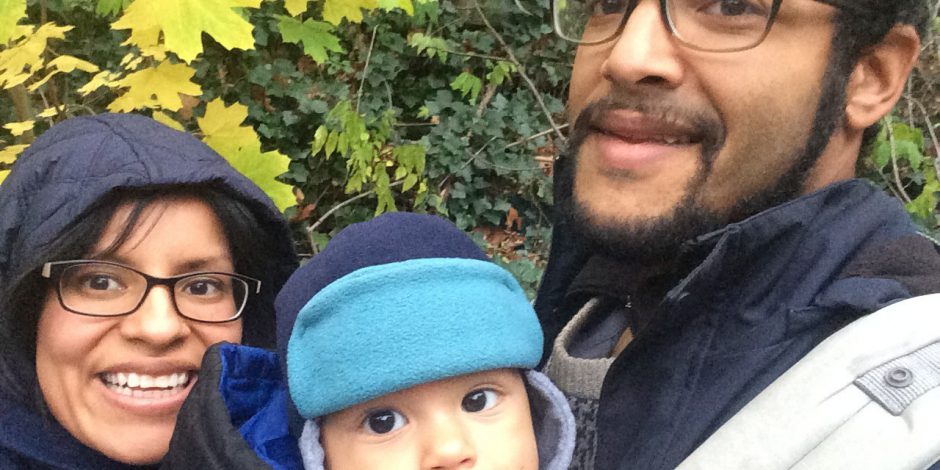 We are pleased to introduce our wonderful son Hatuey Joaquin, who just turned one week today.

Our birth was a challenging experience, probably the most difficult of any of our lives thus far – Hatuey’s heart rate was very high throughout the labor and this prevented us from going to the birthing center.

To start off, Rosalba began feeling contractions late in the evening on October 13th, and around dawn her water broke. At this point, we called our doula to let her know. We decided as a team to stay home, until contractions got closer although Rosalba at this point was in pain but still strong. All the while, Rosalba’s concerned mom kept insisting that we go to the hospital, which was stressful for her to handle along with the contractions. Around 7:00am we decided it was time to go to the hospital. Our doula called an uber, and Rosalba sat in the middle backseat which was a bad decision as she felt every bump and turn from the south Bronx to Midtown (during morning rush hour!!!) which led her to throw up. We practiced our breathing exercises, which helped a bit but occasionally we stopped the practice because Rasheed had to give the driver instructions for the fastest route.  By the time we arrived at the hospital, Rosalba felt as though the constant flow of watery fluid had soaked the bottom area where she was sitting.

Once there, we went to the labor and delivery floor where Rosalba was asked to sign paperwork while standing. At this point she was in deep agony (it maybe took 5 minutes but it felt like forever). She was then assigned to a bed in an intermediary room with other women who were also in labor. Another woman, screamed because of the pain and this added to the stressful ambiance. Our midwife, Cohava, arrived shortly after Rosalba was admitted and assessed the health of our baby. Right off the bat, we were told the baby’s heart rate was too high and that we would be unable to give birth in the birthing center. Of course, we were disappointed but mostly alarmed for our baby’s health. Instead, we were sent to the labor and delivery floor.

We tried to make the best of it and do the active labor exercises we had practiced – the co-breathing was extremely helpful and we did this for most of the contractions. But, on an IV and with constant monitoring, Rosalba was never able to fully relax and the baby was also stressed. His heart rate remained high.

The L&D team was keeping a close eye on us and after several hours of contractions and with very little change in dilation, they told us we needed to use an epidural to try to help relaxation and then Pitocin to bring on stronger contractions. After a discussion together and weighing out our options, we decided to go ahead with using these interventions as Rosalba had a fever and we were most concerned with making sure baby was safe and healthy.

After about two hours on the epidural and one hour after the Pitocin (oxytocin) had been administered, our midwife, Cohava, told us that a cesarean section needed to be performed. She made it clear to me that this was not a choice but what needed to be done to make sure the baby would be all right. This was the hardest moment of our birthing journey as we were being told, not asked to allow for an intervention we did not want. We discussed it and checked in with our doula and ultimately drew upon what we had discussed in class where we touched upon our greatest fear – and our greatest fear was a C-section.

In the operating room, we were together and we were able to put into practice what we had envisioned for our birth in this case: Being together and talking to one another. We talked about our early moments together and how we fell in love. When Hatuey arrived Rasheed was able to call out the baby’s sex – a mystery to all up until that point. All of his vitals were good – his heart rate back to normal. Rasheed went over to where they were weighing and measuring Hatuey’s body. Rasheed got to hold him and bring Hatuey over to Rosalba and they nestled cheek to cheek for several moments – he smiled for the first time during this.  At that point Rasheed was able to have skin-to-skin contact.

The three of us shared a moment together there in the operating room. Two of us were shedding tears and the other was stretching out his lungs for the first time.

We are grateful for this experience and for our healthy and ever-curious Hatuey. We feel strongly that without the support we had in our class and from our doula and midwives that this would have been much more harrowing and possibly even a traumatic experience. It was still challenging – but one that we shared and that had a profound positive effect on all of us.

Recovering with baby Hatuey with “shirts pulled up” skin to skin